Coming Out & Coming In

Home/WOW Blog/Coming Out & Coming In
Previous Next

Coming Out & Coming In

We humans like our words, and we like them simple. We throw around the word “immigrants” as if somehow the 250,000 people who migrate to Canada every year can be summed up in one term, when in fact their diversity is staggering. They are skilled professionals, entrepreneurs, temporary workers, family members, refugees and more. They are men, women, children. They are young and old, from Africa, Asia, the Caribbean and every possible corner of the world.

Increasingly there is recognition of the diversity within diversity – what academics call intersectionality and what I call the double- or triple-whammy: people whose journey as migrants is complicated by characteristics that amplify their vulnerability – such as aging immigrants, immigrant women, refugees with disabilities, and the growing population of lesbian, gay, bisexual or transgender (LGBT) migrants.

This last group was the subject of a fascinating public discussion at Raw Sugar Cafe on Monday, the first day of #2015WOW. Organized by uOttawa researcher Patti Lenard, Coming In & Coming Out featured five experts sharing their knowledge of the challenges and opportunities associated with the Canadian immigration policy of recognizing persecution based on sexuality as grounds for asylum. 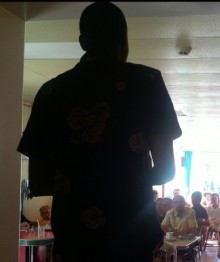 Speakers included Lisa Hébert of Capital Rainbow Refuge, a grassroots organization that organizes LGBT refugee sponsorships and mentors other groups wanting to do the same; David Pepper of North Star Triangle Project, a longtime LGBT activist and member of CRR; Mego Nerses, a mental health counsellor at the Centretown Community Health Centre; Jamie Liew, a uOttawa law professor with an expertise in immigration law; and Alexandre Inkingi, a former international student from Burundi, via Zimbabwe, now working at the Ontario Council of Agencies Serving Immigrants.

The format was simple: each speaker took to the microphone for 5 minutes to share his or her experience or expertise, then the issues were explored in greater depth in conversation with an extremely attentive audience. The easygoing vibe of Raw Sugar Cafe was perfect for attracting new audience members who stumbled on the event, pulled up a chair and lingered.

Whether it was the mechanics of becoming a refugee sponsor, the historical and political perspectives on government policy or the stories of social and health services simply unable to keep up with the growth of this population, the different threads of the theme came together in an informal but powerful conversation.

Oh, and I owe you full disclosure – or is it a disclaimer? I didn’t just love the event because I was the moderator – even if it meant I got to sit up close and personal with the speakers. I loved it because it was one of those times when it felt like everyone in the room was listening with open ears and an open heart, and everyone was learning.

The message came through clearly: there is something each of us can do to smooth the path for LGBT immigrants in need of safe haven: by volunteering, by sharing information, by lobbying for policy extensions. As Alexandre shared his intensely personal tale of transition from in-the-closet international student to out-of-the-closet refugee spurned by family, he reminded us that we also help simply by opening ourselves up and saying one very important word: Welcome.