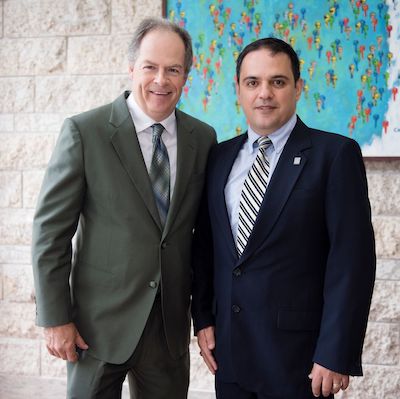 When Omer Livvarcin responded to Carol Jolin’s Kijiji ad to buy a car in Ottawa last September, little did he know it lead him to a new friendship.

Omer had just moved with his spouse and two sons from Turkey, and they were quite literally sleeping on the floor of their Orleans home. They had arrived in Canada with nothing and knew no one.

Carol, a retired teacher, could not believe that this young family was sleeping on the floor so he rallied into action to help.

“This was my first experience in helping a newcomer to Ottawa,” remembers Carol. “I said to them, what do you mean you are sleeping on the floor? I brought them to Costco to buy beds for their boys and I lent them my inflatable mattress.

Carol also assisted Omer to get his learner’s license, to shop for car insurance, to find a dependable mechanic and how to install winter tires. He also wrote a letter of support for Omer’s immigration application.

On many occasions when Carol dropped by to visit the Livarrcins, he went through interview questions on various topics, to help the family learn about their new life in Canada.

“This family just needed a hand to get started with their new life,” remarked Carol. “We really like Omer and his wife, and their boys are very well behaved. We felt the boys needed a respite from the stress of moving to a new country – so we invited them to have a swim in our pool.  It was nice to watch them have a good time with the water guns. I had to step in because Omer was losing the battle.”

When Omer and his wife worry about taking too much of Louise and Carol’s time, Carol just replied, “don’t worry at all, we’re retired“. “We try to put ourselves in their shoes, and can’t imagine what it would feel like to arrive in a new country with nothing,” added Carol.

As the Livarrcin family continue their journey to integrating in Ottawa life, Carol has introduced them to Canadian culture, including a local delicacy, beaver tails. Carol laughs as he remembers the look of disbelief on Omer’s face when he told him he must try a beaver tail. Omer Googled the Turkish translation for beaver tail and seemed puzzled. Soon he would find out what a great pastry it is!