Student Helps Newcomers from Syria Adapt to Life in Ottawa 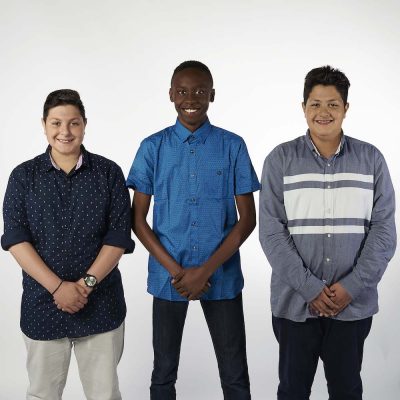 When Syrian teenaged twins, Chabel and Johny Dawhari arrived in Ottawa in February 2016, they were struck by the cold weather and worried about what the future would hold for them.

Five years earlier they had fled their home in war-torn Syria with their older brother and parents for Beirut, Lebanon. Now they were in yet another new country, feeling somewhat lost and insecure.

Starting in a new school in the middle of the school year would be difficult and confusing for any teenager, let alone the Dawhari twins who lacked context and an understanding of the new school system. One of their grade nine teachers at École secondaire catholique Franco-Cité noticed their dilemma and found them a peer helper, Aaron Kabemba, through the Support Services for New Arrivals program.

Aaron had stood in their shoes as a refugee from the Democratic Republic of Congo – now he was ready to help others work through the same issues he had encountered when he arrived in Ottawa a year ago.
Aaron’s bright smile and easy friendship was just what the boys needed. “It was a bit hard arriving here, with the cold climate and without friends, says Johny. “We didn’t even know the basics, like how to take the bus, and Aaron provided a helping hand,”added Johny.

Aaron, who during the first semester was with the boys in five of their six classes, became a positive influence – assisting with their studies and answering their day to day questions. “It was at lunch hour during the first day we met Aaron that he took the time to guide us through the things we didn’t understand,” said Chabel. “Now we not only study together, we eat together and socialize after school. Aaron is not only our best friend, he is like our brother!”

Imad Dawhari, the boys’ father reiterates the value of this newfound friendship. “My family has been through so much turmoil and would have been really hard for my sons to adjust without Aaron at their side.”

Chabel is proud to be a “newcomer” – a term he much prefers to “refugee”. He recognizes the importance of integrating into every aspect of life in Canada. “Initially we met a few friends at school who were from Lebanon,” said Chabel. “The problem was we only spoke Arabic with them. Aaron helps us with our French and that’s really important for us.”

When Aaron moved to Ottawa in 2015, he had two cousins who helped him adjust. “I had a similar experience to Johny and Chabel and am so happy I can give back to other newcomers,” said Aaron. He feels like the benefits of this new friendship are reciprocal in many ways. “I feel so much part of their family as they belong to mine. I even enjoy Syrian food now and am learning to speak Arabic!”

Like any other teenagers, when not busy with their studies, the trio enjoy playing video games and soccer and just plain kidding around and sharing jokes on their phones. As they head into exams soon, what they most look forward to is summer vacation, together as new friends.