The kindness and generosity of strangers 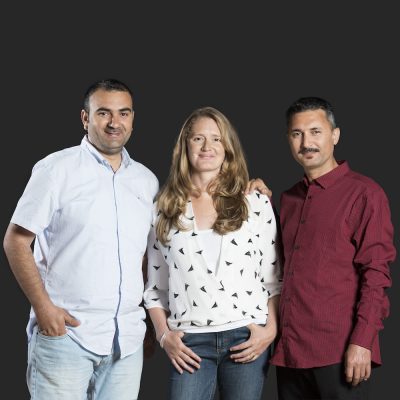 Before the civil war erupted in his country, Wasim Soufi studied English literature in Aleppo, Syria. His road to Canada was a long one.

He fled Syria and worked for a few years in Saudia Arabia, but when his contract ended, Wasim knew returning to war torn Syria was not an option. Fortunately, Wasim had met a Canadian, Andrew Harvey, in Aleppo in 2006, and the two had become fast friends. When it became clear he was going to be deported from Saudi Arabia, Wasim reached out to Andrew for help. Andrew recruited Clare Glassco, and together they formed OC Refugee to sponsor Wasim and his wife Rasha to come to Ottawa.

“Clare said that she would never give up on bringing us to Ottawa,” says Wasim. “Through Skype and Facebook we communicated almost every day about the application. Clare is the one who did nearly everything.” Clare has a great deal of energy, even with her busy schedule as the mother of a one year-old working on a Masters degree in social work. “She and the group, which included the help of the Osgood Kars Pastoral Charge, did a really great job, renting an apartment for us, furnishing it, buying winter clothes and phone cards, setting up our internet and even providing psychological support when needed. The OC Refugee Group was very organized.”

In November 2017, nineteen months after the application was submitted, Wasim and Rash arrived in Ottawa. While many newcomers find their first winter to be harsh, Wasim appreciates it and hopes to take up ice skating next year.

“I am deeply honoured to receive the Welcoming Ottawa Ambassador award,” says Clare. She credits Wasim’s strength and tenacity for his success. “Although I gave Wasim moral support to help him in his job search, he was the one out there pounding the pavement every day.” Wasim now works for a language company, teaching Arabic to Canadian diplomats.

Once Wasim made contact with Clare to begin his application process, he mentioned to her how concerned he was about his cousin and his family who were also about to be deported from Saudi Arabia.  It didn’t take Clare long to jump into action to bring Abdulaziz Aboud, his wife Mayada and their four children to Ottawa as Syrian refugees.

Two years before Wasim arrived with his family in March 2018, Clare Glassco, though OC Refugee, had begun the very complex application process and detailed paperwork required for him to immigrate.

“She is very generous and did not hesitate to help us in many ways,” says Abdulaziz. “When we arrived at Ottawa airport, Clare and her friends were waiting for us with a big Welcome to Canada sign! We stayed at her friend’s house for a few days until we moved to our apartment. She took us to a family doctor and registered my children for school. We now have a big family here in Canada and we are proud to be part of this community.”

While there was a flurry of activity in the first few months, Clare continues to visit Wasim and Abdulaziz frequently, just to check on the families and make sure everything is okay. “I cannot find the words to express Clare’s extraordinary kindness,” states Abdulaziz. “She is truly a Welcoming Ottawa Ambassador and I don’t know where my family would be without her.”

“I’m thrilled to get this award, mostly because it comes from these two cousins who nominated me,” says Clare. “It’s a unique privilege to get involved in sponsoring refugees. Abdulaziz and Wasim have become part of my family, my one year-old son is already completely attached to them. It’s been a very special experience for all of us.”

“We tell her it’s your house, you can drop by at any time,” explains Abdulaziz. Clare and her family recently participated in an Iftar at his house. Iftar is the evening meal with which Muslims end their daily Ramadan fast at sunset.

“Although we love being in Canada, there is huge amount of loss when you can’t go back to your home country, remarks Wasim. “It will always be bittersweet, but the kindness of people like Clare helps to make it easier.”