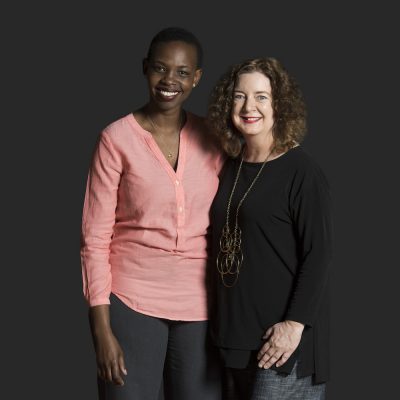 “I arrived in Canada in May 2016 and first met Kelly McGahey in October of the same year,” says Diane Tuyishime, a newcomer from Burundi. We were matched through the Ottawa Community Immigrant Services Organization (OCISO) career mentoring program.

“Every week, Kelly and I would meet at her office,” says Diane. “We had a simple routine: go in the kitchen to make ourselves coffee before heading to the meeting room to chat about life in Ottawa and my job search. Our conversations were of immense value to me. That simple routine also changed my image of Canadian offices and workplaces. It went from the tall, modern, all glass impenetrable buildings, to a warm and welcoming place. A place where I felt the possibility of belonging.”

Kelly works at Hire Immigrants Ottawa (HIO) and has volunteered as an OCISCO mentor for several years.  “Kelly introduced me to her network and people who work in marketing and communications, which is my field of work,” adds Diane. “Encouraged by her support, I was able to secure a job within four months. Kelly helped build my confidence and pointed out that I fully deserved this position.”

“What I value the most about our relationship, is the respect and trust she has shown me,” says Diane. “She has respected my decisions all the way and provided her opinion only when I asked for it. I have, at times, made decisions that I knew she wouldn’t strongly recommend. Even then, she valued my perspective and trusted that I was the one to make the call.

Kelly recently invited Diane to deliver a speech at a HIO event in front of more than 100 people, which was a little intimidating for Diane. “Kelly believed I was able to do it, even when I was not so sure myself,” explains Diane.

“For that and for all the hundred little things we have shared, Kelly is my ambassador of welcome in Ottawa,” concludes Diane.

“I am deeply honoured and grateful to receive the Welcoming Ambassador award,” states Kelly. “It’s been such a pleasure to work with Diane. It’s not just about the job search, Diane and I enjoy each other’s company.”

When Diane found a job, their formal mentorship relationship came to an end, but they have remained good friends, often sharing chats and lunches together.