Dreaming of an Education 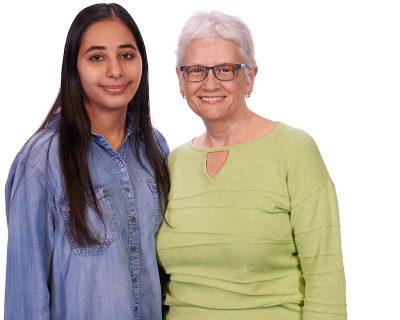 On their initial night in Canada in November 2016, when they stayed at Mary-Martha Hale’s house, the first English word Hiba Omar and her younger sister blurted out was “school.”

Seven years ago, her family had fled war-torn Aleppo, and lived as refugees in Turkey for five years.  Hiba missed grades three to eight and so yearned to have an education. Instead she found herself working in her mother’s home business to help the family make ends meet.

“I really missed going to school and as refugees we experienced resentment from the local people,” remembers Hiba. Then they were offered the chance to immigrate to Canada.  “I felt so happy to know I was coming to Canada, but a bit scared and sad about leaving family back in Syria.”

When her family arrived in Ottawa, Mary-Martha was at the airport, along with other sponsorship group members from St. Albans Church.  “When I saw Mary-Martha, I liked her immediately and felt safe,” says Hiba. “She does a lot for my family. She’s like a second mother who I can confide.  She understands me and gives me choices on how to solve problems. Mary-Martha is a very nice person and really cares about our family and refugees. ”

Mary-Martha has shown warmth and hospitality to the newcomer community