The Circle of Hope 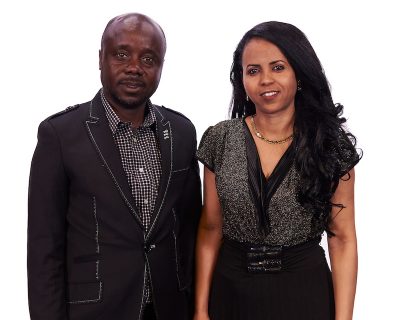 Tblets Tesfalidet Tesfamariam will never forget December 8, 2016, the day she arrived in Ottawa. As she came down the escalator at Ottawa airport, she was greeted by her sister, Tgisti and members of the sponsorship group from the Grace Communion International Church of Ottawa-Gatineau, including Pastor Nova Musafiri. Pastor Nova pointed to the large picture of Ottawa and said “can you believe you are here now!” For the first time in many years she felt safe.

Tblets had spent five years as a refugee in Sudan after fleeing her homeland of Eritrea, a country that had been at war with Ethiopia. “Life was very difficult in Shegerab Camp, because I couldn’t work and scraped by on what the UN provided,” explains Tblets.

The church had sponsored Tgisti and her family a few years ago and finally Tblets was joining them. “As a family we cannot express our gratitude in words for what the church has done for us and particularly pastor Nova Musafiri who played a big role in our sponsorship and settlement,” says Tblets. “Pastor Nova and his church did not know us before, but they have shown us true love. It is not only our family, but also people from all over the world have been helped to settle and integrate in this wonderful land of peace, rule of law and prosperity.”

“Pastor Nova spends his weekends running after newcomers to make sure they are doing fine,” adds Tblets.” He orients us about safety and works with co–sponsors tirelessly to make sure newcomers like myself go to school, find employment and participate in the community.”

The church has been a Sponsorship Agreement Holder for the last seven years and has joined with constituency groups to sponsor around 120 Syrian refugees and 180 people from other countries. “We have an outreach program to help people with humanitarian services,” explains Pastor Nova. In the case of Tblets, she was assisted in finding a full-time job as a cleaner.

“It is not just material things, Pastor Nova really cares,” says Tblets. “He is constantly asking me how I’m doing and providing emotional support. I have learned that I need to be like him.”

Like Tblet, Pastor Nova will never forget the day he came to Canada – December 8, 2008. Originally from the Democratic Republic of Congo, he had spent 15 difficult years as a refugee in Kenya.  Although he was trained by an international organization to be a nurse, he couldn’t continue with the work as it left him sad and emotionally depleted.

“I went through a lot. There were so many people from different countries in the camp on the border of Sudan and Kenya. There wasn’t enough support, equipment and medicine. I felt helpless as I saw young children needlessly die. I knew someday I had to make it my mission to help people. In a great country like Canada, we open our doors and help refugees from around the world.” Now he leads a church that embodies this mission of love and helping people from overseas, as he notes an excerpt from a passage in the bible (Matthew 25:35):  “I was a stranger and you invited me in.”

“Some people don’t realize the strength and important contribution of refugees to our country,” says Pastor Nova. “When they are in refugee camps often they don’t have the right to work, go to school and move around freely.  Once they have these rights, they can easily integrate into our country. Tblets asked me to help her find a job the first week she was here, because she was finally free to work.” The majority of privately sponsored refugees find employment at a rate that is higher than Government Assisted Refugees, thanks to a close network that supports them.

Tblets not only has adapted well to her new life, she has come full circle. She volunteers in the church’s children’s ministry and helps other immigrants by bringing them to appointments, helping them learn about travelling by bus and translating from Arabic. “It’s me who has to thank her as she is now giving back and supporting our refugee settlement program,” concludes Pastor Nova. Tblets has joined the circle of hope.