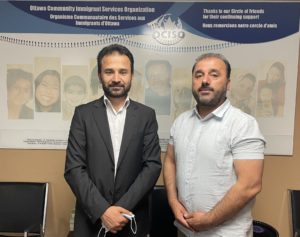 In Afghanistan, there is a proverb that says, “A real friend is one who takes the hand of his friend in times of distress and helplessness.” When Fazul Rahim arrived in Ottawa on September 28, 2021, he needed someone to take his hand more than any time before. He also found that real friend in Khalid.

Despite the difficulties and problems of last two decades, like many refugees, Fazul had never imagined leaving his birthplace of Afghanistan. He had built a house there and invested all his savings in the country.

Fazul, along with his wife and six children (ranging in age from 5 to 20), fled Afghanistan a week after the collapse of Kabul, amidst the chaos and violence that ensued after the withdrawal of the NATO forces. They were in great danger as Fazul, a journalist, had worked for CBS, NBC and the UN Development program. The family evacuated to Quatar, where for five weeks they began to process their shock and await the completion of their paperwork to come to Canada as refugees.

After such an upheaval and turbulence, he would still wake up thinking he was in Kabul. “When I arrived in Ottawa, I didn’t know how things would work here,” says Fazul. “What we really needed was someone to welcome us and explain what to expect.”

An Afghan acquaintance introduced him to Mohd Khalid Naseemi (commonly referred to as Khalid) by phone. The very next day Khalid showed up at the hotel where they were staying.

“This is your home, anything I can do, I will help,” said Khalid to Fazul. His kindness and reassurance were comforting. “He guided me through every step of the way,” remarks Fazul. “Our settlement would not have been the same without him.”

Mr. Naseemi had worked at the Afghanistan embassy in Ottawa and was about to join the Ottawa Community Immigrant Services Organization (OCISO) as a Settlement and Integration Councillor.

“The most important aspect of settlement work, beyond the technical parts, is compassion and passion to help others,” says Khalid. “I remember my own experience and the initial days when I came to Canada in 2013. Everything is different. It takes a few months for newcomers to understand how everything works.”

As anyone knows, a trip to Costco can be daunting by bus, so Khalid drove the family there in his own van and helped the family to buy a membership to the wholesale store.

“When you move to a new community, coming from a very different environment, that sense of being welcomed, of being at home, is very important,” explains Fazul. “Khalid sacrificed time with his own family to help others. That takes a lot of passion and commitment. He had his regular full-time job, and yet is doing more. I’ve seen him patiently helping people fill out their forms. What I’ve noticed in Khalid is that sense of selflessness, without any expectation of getting anything back.”

“Fazul is a brilliant man,” adds Khalid. “Another main aspect of settlement is empowerment. I’m just sharing resources. He has a broad experience, I just guided him a little, gave him some tips, but he’s working so hard. Fazul settled very quickly and I am optimistic that he will secure a good job soon.”

“What touched me about Khalid, was he didn’t do this as part of his job, adds Fazul. “He was there every step of the way, welcoming us into his home, assisting with school assessments, at the family reception centre, helping me to get a driver’s license and lending me his own car for the driving test. The toughest part was finding a house, including the application, credit score, proof of income and employment. I had six applications rejected.” Khalid helped him to work through this challenge.

Now the family is settled into a busy life in Ottawa and the children are all in school. “Throughout the whole journey, he has been there for me, explains Fazul. “I can’t imagine Ottawa without Khalid. He is such a humble person who has inspired me to help other Afghan families.” A true friend indeed.