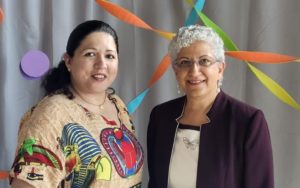 The conviction that we belong to one human family is at the heart of the Bahá’í faith. When Haidy Mostafa and her family found themselves in a very dire situation, it was Shiva Yan who embodied that conviction.

The two women had met while working on a project in China in 2009. They both also are Baha’is. They connected off and on since that time.

Haidy had worked for China Central TV, while her Iraqi husband completed his Master’s degree. Life became difficult for them when unexpectedly her husband couldn’t renew his Chinese visa and had to leave to Turkey, one of a few countries that issued visas to Iraqis at the time. Haidy and her young son were faced with separation from him for years, as he wasn’t able to go back to China where they lived since they got married, his application with the UN was moving very slowly and it wasn’t safe to go back to Iraq which was at the time partially controlled by ISIS.

“At one point I considered moving to Turkey,” says Haidy.” But my visa to Turkey was rejected while my working visa in China was renewed smoothly.” There was also the concern about their son’s education. He was thriving in the Chinese schooling system, as he grew up there and had already mastered the Chinese language. Learning Turkish before starting his studies would have been disruptive.

The process ahead would be long, complicated and arduous. That’s where Shiva came in.

Haidy had found out about Group of Five sponsorship process through a former colleague they had met when working at the UN as translators. “We were very worried and pressed for time. I contacted Shiva wondering if she could sponsor us and heard back within a few days,” remembers Haidy.

Shiva, a psychotherapist now living in Stittsville, a suburb of Ottawa, said yes. “I realized the family was stuck in a very difficult position,” explains Shiva. “I wanted to help but was not sure what the paperwork involved. My husband who is very detail-oriented took it upon himself to take care of the complicated paperwork.” They quickly recruited three other people from the local Bahá’í community, a couple and Shiva’s brother. The sponsorship package was signed and ready for submission in a week or so.

Explaining why she may not be able to respond to their communications quickly, Shiva told Haidy that she had been diagnosed with cancer and was about to begin chemotherapy. “She could have easily said no given her situation,” remarks Haidy. “She demonstrated trust, serenity and generosity beyond measure.”

The journey towards reunification was long for this family. It took about 18 months for the Group of Five application to be processed and for the husband to arrive in Canada alone, then Haidy’s file was processed as a family reunification application. A year after his arrival, Haidy with their 15-year-old son Anis joined him in Ottawa.

Years before, Shiva had her own immigration journey. Just before the revolution in 1978, she and her family escaped from Iran , where people of the Bahá’í faith faced severe persecution. They were thankful for the beacon of hope Canada offered and the hospitality of the people of Nova Scotia, where they first landed.

“We could put ourselves in their shoes,” adds Shiva, “Though this was difficult and stressful time for my family with my cancer diagnosis, which was thankfully caught early, I just couldn’t say no. I also knew how dedicated to service Haidy is. This family coming here was also a good thing for Canada.”

Shiva survived cancer and welcomed the family warmly when they arrived in Ottawa.

“She and her husband introduced us to more friends, helped us file for taxes for the first time and answered our many questions,” says Haidy. “I never experienced a patronizing attitude or felt that she expects anything in return. Shiva doesn’t even think she did us a favor. Shiva has shown me that she has trust in my abilities, from the time when we worked together to implement a project in in 250 Chinese public schools, to now in Canada. She has always treated us as equals.”

“In our faith, we believe everyone is created noble and we are a manifestation of all the different virtues bestowed to us by God,” said Shiva. “We see the good in people and trust their nobility. Since moving to Canada, I have learned that trust is also a strong Canadian value.”

“I consider myself privileged. I had the experience of living in a different culture and knowing English before arriving to Canada. I see other newcomers who struggle. We try to give back to others. Our son was blessed and lucky to never have missed a day of school, unlike many refugee children. I had to take care of my son and many other complicated affairs alone for five years, but this difficulty made me spiritually stronger. These things are all blessings,” added Haidy.

“I see her son as a fine young man,” remarks Shiva. “They brought him up as a world citizen and he plans to enroll in international studies program. He can adapt to different cultures quickly, and speaks English, Arabic and Mandarin well. He is working with low-income neighbourhoods, helping people from all over the world.”

Shiva is inspired by Haidy’s positive attitude. “This family is putting in an effort to help others,” adds Shiva. “It’s wonderful to have them here. They hit the ground running and they give every day.”

The two have also united as members of one human family – making Canada stronger along the way.